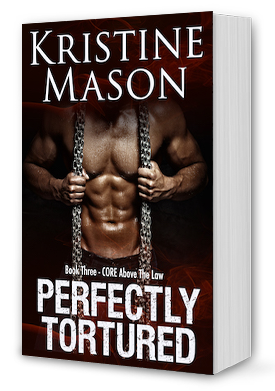 Book 3: CORE Above the Law

What happens when you fall in love with the sister of the serial killer you’re hunting? Something perfectly tortured…

ATL agent Harrison Fairclough has one thing on his mind: stopping a serial killer. He knows who the man is, where he lives and who he’s murdered. The problem? He can’t prove Liam Forrester is a killer without exposing ATL—an agency that isn’t supposed to exist. Needing to get close to Liam, and lead investigators to him before someone else dies, Harrison comes up with the perfect solution…he dates the serial killer’s sister. Except his plan quickly derails once he meets the curvy physical therapist. He’s drawn to her sensual smile, comes to crave her kisses and touch, until the body count rises.

Kiera Forrester’s schizophrenic brother, Liam, has occupied the past ten years of her life. He still does, so much that she’s moved to Florida to watch over him. When she meets her new neighbor, Harrison, she’s instantly attracted to the sexy web designer. But as their relationship heats up and Keira realizes she’s falling in love with Harrison, she’s afraid there’s no future for them. The dark secrets of Liam’s past can’t be hidden away, especially when those secrets lead to murder…

To get the most from the C.O.R.E. Above the Law trilogy, it’s recommended to read the books in order: Perfectly Twisted (Book 1), Perfectly Toxic (Book 2), Perfectly Tortured (Book 3).