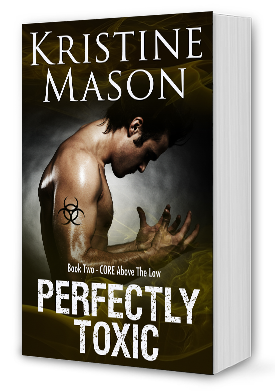 Book 2: CORE Above the Law

What do you get when you mix a mad scientist, a psychopath, an ice cream lady and a repo man? Something perfectly toxic…

Melanie Scarlet is a knife-wielding badass who knows how to dispose of a body, and make evidence disappear. But Mel, a.k.a., the Ice Cream Lady, draws the line at one thing: she refuses to live with her husband, Cash Maddox, unless he quits the repo business that nearly got him killed—no matter how much she loves him.

To thaw Mel’s heart and convince her to leave the Everglades and move back home to Tallahassee, Cash is finally ready to retire from his adrenaline-fueled job…until homeless men begin vanishing. As Mel investigates the disappearances, Cash’s temper goes into overdrive when he realizes his wife has been keeping a dangerous secret from him. She’s been doing more than scooping ice cream—she’s a cleaner for the underground criminal investigation agency, Above the Law.

Mel isn’t the only one with a secret. A scientist has created a drug that will cure psychopaths by deadening the urge to dominate, hurt and murder. To prove his chemical combination works, he uses the homeless as test subjects. He breaks and scrambles their minds, turns them into killers, then tries to fix them. But what if the scientist creates a killer he can’t fix? A true psychopath he can’t control? As Cash joins Mel and the ATL crew, they learn firsthand, the results could be…toxic.