Excerpt: Smile for Me 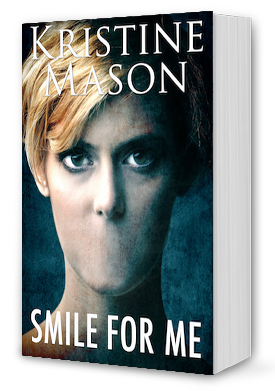 “I look forward to being older, when what you look like becomes less and less an issue and what you are is the point.”

AGE GRACEFULLY? WHOEVER came up with that slogan could kiss her dimpled butt.

Lisa Duplain had no desire to embrace the deep nasolabial fold running from the side of her nostrils to the corners of her mouth, or the starting signs of the marionette lines drooping from her mouth to her chin. Marionette lines. As if she had the mouth and chin of a ventriloquist’s puppet.

After turning forty-five last month, she was now officially considered middle aged. Forty-five. When had that happened? Where had the years and her youth gone? Instead of accepting the aging process, she envied her fifteen-year-old daughter’s smooth skin and perfect complexion. She spent hundreds of dollars on anti-aging creams, and hours in front of the mirror studying her pores, the fine lines skirting her eyes, or pulling the skin around her face to remember what she’d once been. Pretty. Desirable. Young.

She turned into the driveway of Melody’s Grace. After shifting the car into PARK, she stared at the bed and breakfast where she would be spending the weekend. Although built in the late 1800s, the imposing Queen Anne Victorian home looked as if it had just been freshly painted a pale yellow with white and robin’s egg blue trim. The B&B had a front-facing gable, large wrap-around front porch, a second story balcony, a funky spiral chimney and even a turret with circular windows. Her best friend, Christa, who had recommended a stay here, had thought Melody’s Grace was beautiful, that the architectural details were amazing and the flowering English garden gorgeous. Then again, Christa had always been a head in the clouds romantic.

Lisa rolled her small suitcase up the drive and toward the brick walkway leading to the front porch. When she reached the front door, she noticed the paint wasn’t as fresh as she’d thought, and that there were several weathered, wooden shingles in need of replacing. And to think that this house was also known as the fountain of youth. To her, the bed and breakfast was outdated, old-fashioned and aging poorly.

She quickly knocked on the door. Thanks to her teenage daughter, she wasn’t old-fashioned and was up on the latest trends. Her husband, Tim, didn’t care for the skinny jeans she wore, or the short skirts and shorts, claiming the style was too young. Tim’s opinion made no difference to her. He’d packed on thirty pounds since turning forty, and in the seven years since, with the exception of suits, ties and underwear, he hadn’t updated his wardrobe. But she didn’t want to think about Tim, or their daughter and two sons. This weekend was about her, about regaining her youth.

The door opened, and a pretty woman, whom she placed in her early-fifties, greeted her with a smile. “Lisa?” she asked, then introduced herself as Evelyn Quade Carter, owner of the bed and breakfast. “Christa Beaumont emailed me just this morning and reminded me that the two of you are friends.”

“Yes, I’ve known Christa for sixteen years.” Lisa stepped inside the foyer. “We met when our sons were in preschool. It’s hard to believe they’re now sophomores in college.”

Lisa ignored the stab of envy. Since coming to Melody’s Grace over a month ago and staying two nights, ten years had fallen from Christa’s face. Even her body was more toned.

“Christa looks fantastic,” Lisa began as she followed Evelyn into the parlor filled with old furniture upholstered with a gaudy flowery print. “I admit, I was skeptical when she told me about this place, but she’s made a believer out of me.” She smiled. “I’m hoping for the same results.”

Evelyn’s bright blue eyes probed hers with concern. “Not everyone who stays here has left happy.”

“I’ve spent more than two hundred dollars on worse things,” Lisa said, keeping the desperation from her voice. “Even if I don’t walk out of here looking younger, at least I’ll have the weekend to myself.”

Since she couldn’t afford real plastic surgery, she needed to leave Melody’s Grace happy. The bed and breakfast hadn’t been in the budget, not with her son’s college tuition bill due next month. But over the past four weeks, she’d skimmed money off the grocery funds in order to save for the weekend. Tim thought she was in Savannah, visiting her sister. If he found out that she’d lied and wasted money chasing after the fountain of youth, he’d give her hell. Her husband didn’t believe in cosmetic surgery. A few years ago, when she’d first approached him about having work done, the cheap bastard had nixed the idea before she’d finished her sentence, saying there was nothing wrong with the way she looked. Then Tim had added that because he doubted erasing wrinkles and cellulite would lead to sex, surgery was a bad investment for him. Maybe if he’d brought his look to the twenty-first century and lost thirty pounds she would be interested in rekindling their sex life. Since she knew that wouldn’t happen, she’d found other ways to satisfy herself.

Suck on that, Timmy.

Evelyn smiled. “What an excellent attitude. Though I must warn you, there is a good possibility you could leave here exhausted and…more than unhappy.”

Melody’s Grace was located in Ball Ground, Georgia, in the country, and an hour north of her home in Atlanta. There was nothing to do here but read, nap and eat. “What could be so exhausting?” Lisa asked. “And unless I leave here looking worse than I do now, I can’t see how I’m going to be more than unhappy.”

Evelyn walked across the room and retrieved a paper from an ornate antique desk. “You could most definitely leave here looking worse,” she said, handing Lisa the paper. “This is a contract. It states you cannot hold myself or anyone else accountable for what happens at Melody’s Grace. Even if you stumble down the steps during the night and break your leg, you cannot sue the estate or myself. You are also forbidden to discuss what you experience.”

Lisa glanced at the single-page contract which was cut and dried, and to the point. “Most people have homeowner’s insurance to cover them.”

“Most people don’t own a home like I do.”

She looked up and met Evelyn’s concerned gaze. “I have no problem signing your contract.” Lisa went to the desk, then used the pen to sign her name. “I’m not clumsy anyway.”

“That’s good, but unfortunately I’m not talking about clumsiness.”

“Falling down stairs is clumsy.”

Evelyn placed the contract in a drawer. “The fall down the steps is an example I like to use to justify the contract. There are worse things that can happen to you here.”

“I can’t tell you, I can only warn you. And I feel it’s my duty, as owner and caretaker of this estate, to make you completely aware that your stay here could yield life changing consequences.”

As Lisa stared at Evelyn’s flawless skin, she pictured how pretty and confident Christa had become since staying at the bed and breakfast. How Christa’s husband, Blake, now stared at his wife with lust sizzling in his eyes. She wanted to be stared at with sizzling lust and to be the object of desire. And she was determined to get what she wanted. “How old are you?” she asked Evelyn, wondering if the woman’s pretty looks had anything to do with the bed and breakfast.

“Do you believe in the supernatural?” Evelyn asked instead.

“I’m paying you one hundred dollars a night to stay in a house nicknamed the fountain of youth.”

Evelyn’s mouth slid into a small grin. “You didn’t answer the question.”

“You didn’t answer mine,” she countered.

Seventy-three? “Wow, I thought you were in your early fifties. Do you look this good because of the house?”

“Yes, but not everyone has the same results.”

“So you’ve said. I’m willing to take my chances. Can we get started now?”

Evelyn gave her a slight nod, then led her from the parlor and toward the staircase off the main foyer. Lisa followed behind, carrying her small suitcase. “Do you believe in the supernatural?” Evelyn asked again, pausing at the landing halfway up the stairs.

Lisa rested her hand against the dark wooden stair rail. She would believe in unicorns, leprechauns, Santa Claus and the Tooth Fairy if it made her young again. “Yes,” she replied. “Why? Is there some sort of spirit here that makes people young again?”

“All Christa said was that staying here was one of the best decisions of her life. With how great she looks, I believe her.” She stared at the other woman for a moment. After growing up in a plantation house that was over one hundred and forty years old, and listening to her grandmother’s ghost stories, she’d always believed in ghosts, and had occasionally visited psychics. But she considered people who messed with black magic crazy. And, to her, crazy equated dangerous. For the first time since arriving at the house, unease settled on her shoulders. “You’re not into devil worshipping or witchcraft, are you?”

Evelyn’s brows lifted. “Devil worshipping? Heavens, no. Nor am I a witch. But there is an unearthly force at work within this house. A force that cannot be controlled. For you to gain the results you’re hoping for, you must do what you’re instructed. If you’re not willing to, then I’ll gladly refund your money, and you can be on your way.”

Lisa’s unease magnified, but for a different reason. She didn’t like the way Evelyn was trying to talk her out of letting her dip her toes into the house’s figurative fountain of youth. “Look,” she began, “I do believe in the supernatural. I also believe in what I can see. Christa looks beautiful. I want to be beautiful again.” Gripping the suitcase handle tightly, she stepped forward and met Evelyn on the landing. “I don’t want to leave.”

Evelyn touched a lock of Lisa’s shoulder-length, wavy hair. “Beauty is different for all of us. Personally, I don’t think you will benefit from a weekend here.”

“Why do you say that?” she asked, becoming impatient and starting to dislike the woman.

“Christa, and others like her, had excellent results because they possess inner beauty. I believe there is an ugliness within you, and I’m afraid it will surface over the weekend.”

Lisa stiffened. “I see,” she replied. “You’re not too offensive. And I’ll have you know there are plenty of people who like me. Every year I manage the charity drive at our church, I’ve always put my kids’ needs before mine, I—”

“Lisa, stop.” Evelyn placed a hand on her shoulder. “I apologize. I didn’t mean to offend you, and I don’t doubt that you do good things for your family and community.” She let out a sigh. “It’s just…I worry about your well-being.”

Lisa cocked a brow. “I signed your contract, so you’re not liable if my ugly insides surface,” she said with heavy sarcasm. Screw this woman. She didn’t know her. But Christa did. Had her friend gone behind her back and said something negative about her to Evelyn? No, not Christa. She was such a kind and considerate person who never had a bad thing to say about anyone.

Return to Smile for Me