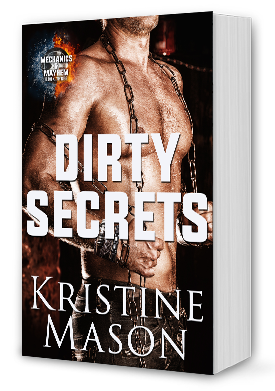 Army veteran and mechanic Sully Dolan spent decades avoiding a serious relationship. After how he’d been raised, he never understood why people bothered with love. Sex, sleep and food were all he needed. Then he meets Detective Jane Cooper.

Sully was supposed to be a one-night-stand. From the moment Jane gripped his hair and fell naked onto his bed, she’d told herself as much. Only one night turned into two, then three… Jane wants to be with Sully, but because of a dark secret that could destroy her if discovered, she brings their relationship to a screeching halt.

After Sully’s best friend is found unconscious on the side of a road, with a dead man next to him, Jane is thrust back into his life as lead detective for the investigation. Although bitter she ended things between them, Sully still misses her. But after too many rejections, how could he trust that she won’t stomp on his heart again? As they try to work through their differences, the past comes back to haunt Jane. Not only could her secrets be revealed and once again tear her and Sully apart, if she isn’t careful…she could lose her life.