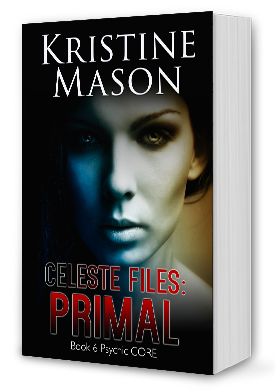 EVERY NERVE ENDING in my body burst to life. I bit down on the plastic mouth guard. Fought the agony, the helplessness, the fear of the unknown. My body, stiff and moving on its own, convulsed against the restraints around my shoulders, waist and legs. Pain shot through my skull, pierced my brain, stimulated the muscles in my face and made my heart beat erratically. Panicking, I cried out, but my screams of terror were muffled by the mouth guard and the loud humming of the machine connected to my head.

“Relax, Karen,” Dr. Ryker said as he removed the electrodes from my temple.

Nurse Martha smiled as she used her body to keep mine from jerking. “Yes, you’re doing just fine.”

I wasn’t fine. After having gone through electroshock therapy more times than I could remember, I didn’t think I’d ever be fine again. Breathing hard, spit filled my dry mouth, while my stomach rolled with nausea and my throat tightened with the urge to vomit. Tears filled my eyes. I swallowed back the rising acid and used my tongue to push against the mouth guard until it fell from my lips.

When a gasp came from the doorway, I turned my head and blinked back the tears until my vision sharpened and my gaze locked on a boy with blue eyes and light brown hair. I knew Dr. Ryker had a son and had overheard him say something about the kid to the nurse. I also knew his name, but couldn’t remember it right now. I couldn’t remember how I even came to be in this place.

“You’re not supposed to be here,” Dr. Ryker said to the boy.

As my limbs continued to twitch, Nurse Martha unhooked the restraint around my waist, only to make it tighter. “Oh, Seth, let him stay.”

“I’m ten,” the boy said, straightening his bony shoulders and pushing out his thin chest. He knocked his bangs from his forehead and stared at her. “Is she the one who’s like Jean Grey?”

“Jean Grey. She’s a human mutant from X-Men and has telepathic and telekinetic powers.”

Now I remembered how I ended up here. After our church minister had ruled out demonic possession, he’d recommended that my parents take me to see Dr. Ryker. According to our minister, the psychiatrist had been known to cure people like me. Human mutants who could do unexplainable things with their minds. But I’m not a mutant. I’m a seventeen-year-old girl who happens to have a weird, yet special gift.

Nurse Martha chuckled. “Human mutant,” she repeated, and looked to Dr. Ryker. “That sounds accurate, no?”

The doctor didn’t crack a smile. Ignoring Martha, he glanced to the boy. “Aiden, son, there are no such things as mutants.”

How many times had I been stared at and ridiculed? I hadn’t asked to be born without pigment, and I was certain my parents hadn’t prayed for an albino baby who looked as if she’d been dipped in flour.

“Have never,” Martha corrected the kid.

The boy rolled his eyes at the nurse and refocused on his father. “Every person you bring to this house has a power. The lady in the attic who can predict the future? She’s like Destiny.”

“And is Destiny also from X-Men?”

The kid nodded. “But she’s a nemesis. Then there’s the guy in our basement. He’s kinda like Cyclops.”

Dr. Ryker frowned. “The man who can shoot lasers from his eyes?”

“Aiden, that is physically impossible. My patient cannot do any such thing.”

“Then why do you and Grandma wear safety suits when you go into his room?”

“Why are you spying on us?” Dr. Ryker countered. “My equipment is very expensive, and some of it is dangerous.” He approached his son and placed a hand on the boy’s shoulder. “My work is very important. I know you’re curious about what I’m doing here, but you’re just too young to fully comprehend it.”

“Not a who, but a super-secret government agency that does genetic experiments on mutants.”

“The child has your imagination,” Nurse Martha said. “Don’t stifle it. After all, your wild ideas led you to become a psychiatrist, and look at all the good work you’ve done for your patients, and even the government.”

“The government?” Aiden echoed with awe.

“It’s not what you think.” Dr. Ryker returned to the bed, then began examining my eyes with a light. “I’ve assisted the FBI by creating psychiatric assessments for the criminals they’re trying to capture. Nothing more. My colleagues at the FBI aren’t aware of my research in parapsychology. And other branches of the government aren’t interested in my work. It’s not considered mainstream science, after all.”

“But I bet if your experiments work, they’ll give you a job.” The boy’s eyes glittered with excitement. “Or maybe the President will.”

Dr. Ryker’s face became blotchy and red. He turned to his son and gripped his shoulders. “No one can know about these experiments. Understand? Have you told anyone about my patients?”

“Mutants are cool. When I grow up, I’m going to experiment on them, too.”

The doctor gave his son a slight shake. “Stop and look at me. Focus on my words. This is a very big secret. No one can know. Now answer me. Have you told anyone?”

“Don’t lie to me. Because I have a machine that will force the truth from you.”

“Hook me up to it,” Aiden challenged. “I haven’t told anyone. I swear.”

As the boy left the room, a dull throb began to develop in my temple, just as it had the last three times Dr. Ryker had given me electroshock therapy. I ignored the pain and instead repeated in my head everything I’d just witnessed. With each treatment, my memory lapsed and I wanted to retain what I’d heard. Nurse Martha was clearly the boy’s grandmother, so I assumed she was the doctor’s mother. The dynamic was strange, but what was even stranger and scarier was that there were other people here. And no one was supposed to know Dr. Ryker was experimenting on them.

Fear crawled along my skin. Did my parents know what was happening? Were the families of the others aware? And where was I? Aiden had mentioned an attic and basement, and Grandma was going to be heading upstairs soon to make dinner, so could this be Dr. Ryker’s house? If it was, I couldn’t believe my parents would allow this man to keep me under his roof for… How many days had I been here?

“When are my mom and dad coming to see me?” I asked, panicking.

Dr. Ryker pressed a stethoscope against my chest. After a moment, he settled his gaze on mine. “Can you hear my thoughts?”

“Give it a shot,” he suggested with an easy smile. “I’m thinking about my answer. Ready?”

I held his gaze and nodded. Concentrated on my breathing, on his, until I heard a faint whisper. One word, repeated over and over.