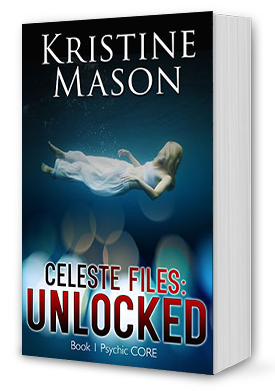 Some secrets should remain locked in the past…

Celeste Kain hasn’t had a psychic vision in two years. After being brutally attacked while helping criminal investigation agency CORE stop a serial killer, her mind repressed her clairvoyant abilities. Married to CORE agent, John Kain, mother to their toddler, Olivia, and owner of an up-and-coming bakery, Celeste has been doing fine psychic-free. Only now the dead are using her body to tell their stories again…putting her new life and family at risk.

Haunted by a murdered woman, Celeste turns to a psychic mentor to learn how to control her gift, protect her family and bring justice to the dead. But the more she digs into the dead woman’s past, the further she slips into the unknown, unlocking secrets literally worth killing for. As the body count rises, it becomes clear: someone in the dead woman’s family is deeply, violently wrong. And Celeste needs to be careful, before she loses something more precious to her than her life.

Celeste Risinski, the heroine of Shadow of Danger (Book 1 CORE Shadow Trilogy), is back with her own series. Join her as she learns how to deal with being a wife, mom, baker and…psychic investigator.