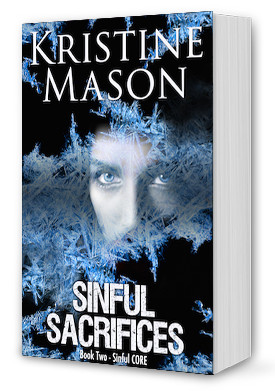 Some sacrifices lead to murder…

A ski trip turns deadly when a bus carrying boys from an elite high school is hijacked and driven to an old abandoned amusement park. With a frozen lake on one side, acres of forest on the other, and up against a blizzard and sub-zero temperatures, the teens are trapped and at the mercy of their kidnappers. They have less than forty-eight hours to escape before the gunmen make good on their threats and begin killing them…one by one.

Chase Sawyer, agent for the criminal investigative firm, CORE, was a badass Crisis Negotiator with the FBI until a hostage situation resulted in the deaths of innocents. In the fallout, he left the Bureau, left the woman he loved, and left town. When a ransom is demanded for the release of fifteen kidnapped teens, Chase returns to Cleveland to work with the FBI and is forced to deal with past mistakes, along with the woman who haunts his dreams.

FBI Agent Summer Raines wonders why she still loves Chase. Before their breakup she’d been questioning their relationship. The man never could commit, and after becoming a crisis negotiator, had turned controlling and distant. Yet, five months ago, when he’d been in Cleveland for an assignment, she’d let him into her house and bed, only to be left brokenhearted once again. Now he’s back and about to get a huge surprise…she’s pregnant with a child he never wanted.